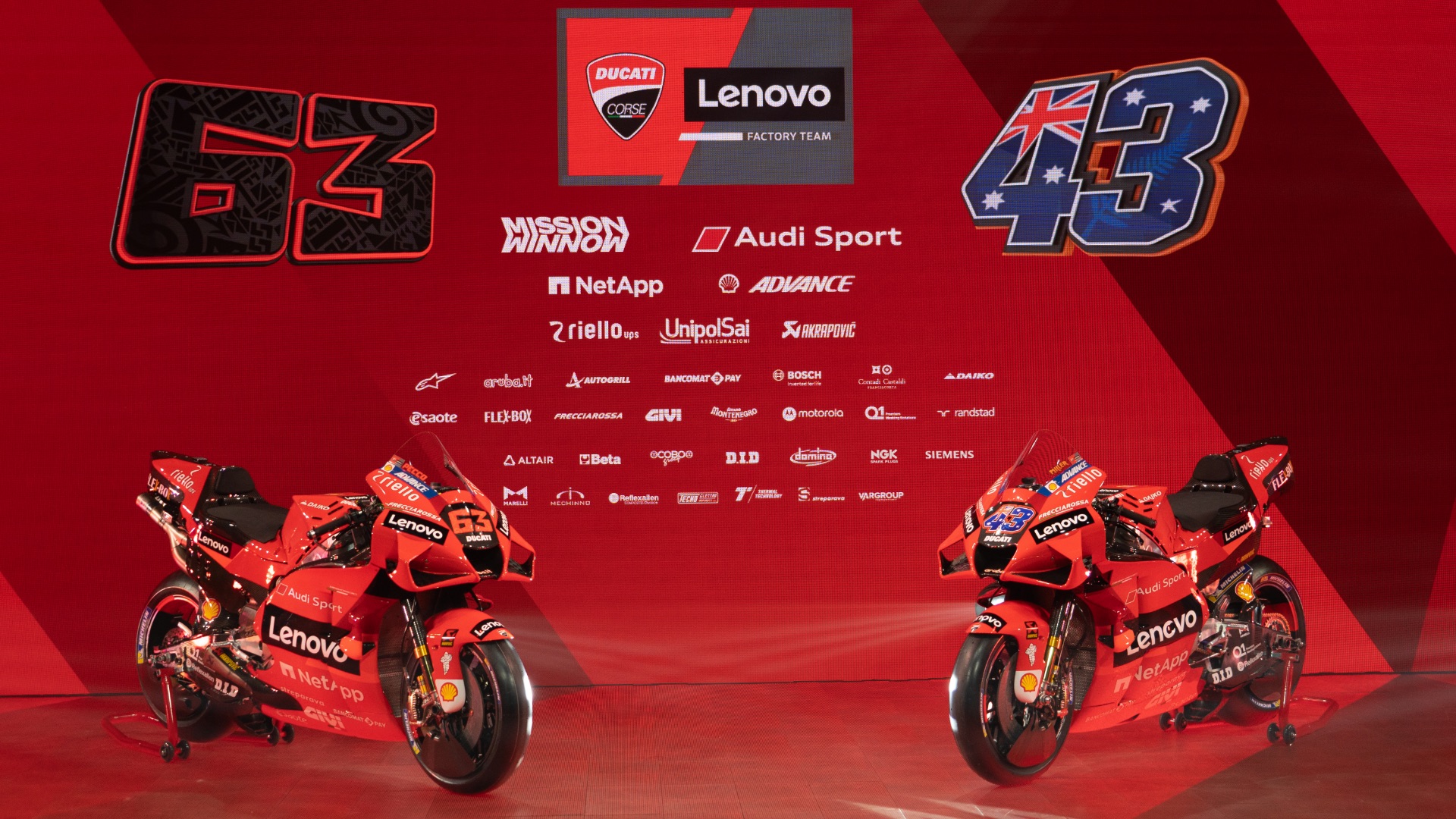 The Official Presentation of the 2021 Ducati Lenovo Team took place today with an online event streamed on Ducati.com, Ducati's YouTube channel, and official Facebook page. During the presentation, Claudio Domenicali, CEO of Ducati Motor Holding, unveiled the new "all red" Desmosedici GP bikes that Jack Miller, 26-year-old from Australia, and Francesco "Pecco Bagnaia, 24-year-old from Turin, will ride in their first season as official riders of the Borgo Panigale-based squad in the MotoGP World Championship. The iconic Ducati red colour returns to predominate the two bikes' liveries where the Lenovo logo also stands out. Announced as Title Partner of the Italian team with a three-year agreement, Lenovo is a technology leader in PCs, smart devices, data center, services and software solutions – becoming Ducati's sponsor and partner in 2018. Over the past three seasons, the company has contributed to developing new strategies and innovations related to racing as a Technical Partner of the team. With the new agreement, Lenovo will guarantee even greater support to the official Ducati squad, which from this year will be named Ducati Lenovo Team. Despite the ongoing Covid-19 pandemic situation, the 2021 MotoGP season currently sees 19 Grands Prix confirmed. It will officially get underway on 5th March in Qatar with a day of testing reserved for rookies and test riders, in which Michele Pirro and the Ducati Test Team will also participate. On 6th-7th March, Jack Miller and Pecco Bagnaia will finally take to the track with their new team at Losail International Circuit for the first official two-day test for 2021, followed by three more days of testing, also in Qatar, from 10th-12th March. Doha Circuit will also set the stage for the first two Grands Prix of the year, held in the evening, from 26th-28th March and 2nd-4th April. Claudio Domenicali, CEO of Ducati Motor Holding: "It is always a great emotion to start a new racing season, which as always we face with dedication and incredible passion, driven by the support of the Ducatisti all over the world. We start strong after winning the Constructors' World Title last year, despite the complexities that have forced us to overcome obstacles and situations that we have never experienced before. In 2021 there are many novelties, starting with the riders: Jack Miller and Pecco Bagnaia. They are now the young riders of our official team after gaining experience with the Pramac Racing Team." Luigi Dall'Igna, General Manager of Ducati Corse: "The start of a new season is always a special moment, and this year even more, as we have a completely new team. We have two new riders with us, Jack Miller and Pecco Bagnaia. Both are extraordinarily talented, they're young, but they have already a lot of experience on our bike. Jack and Pecco have great potential, and I think that together we can fight not only to defend the Constructors' Title won in 2020, but we can also aim for the Riders' Title. As per this year's regulations, we cannot modify some of the bike's components. Still, during winter, we have been able to work on many other aspects to improve our bike's competitiveness and be ready to start the new season." Jack Miller (#43, Ducati Lenovo Team): "The emotions I felt seeing my all-red Desmosedici and wearing my new suit for the first time were incredible! I still have to realize that I'll be part of the official Ducati Team this year. It's taken a long way to get this far, and finally being "in red" gives me a great sense of satisfaction, but also the right motivation to continue working with commitment and dedication towards my future goals. I am looking forward to this new adventure and will try to get some important results this season". Francesco Bagnaia (#63, Ducati Lenovo Team): "This will be a significant season for me because for the first time I'll be wearing the colours of an official team. I'm proud to have achieved this first goal, and this year I will set my sight on even greater results. It has always been my dream to become part of the official Ducati Team. I will try my best not to disappoint any expectations. I'm sure I have all that I need to be competitive right from the start and aim high".