Interview with Claudio Domenicali. From the Ducati dream to the Motor Valley vision. 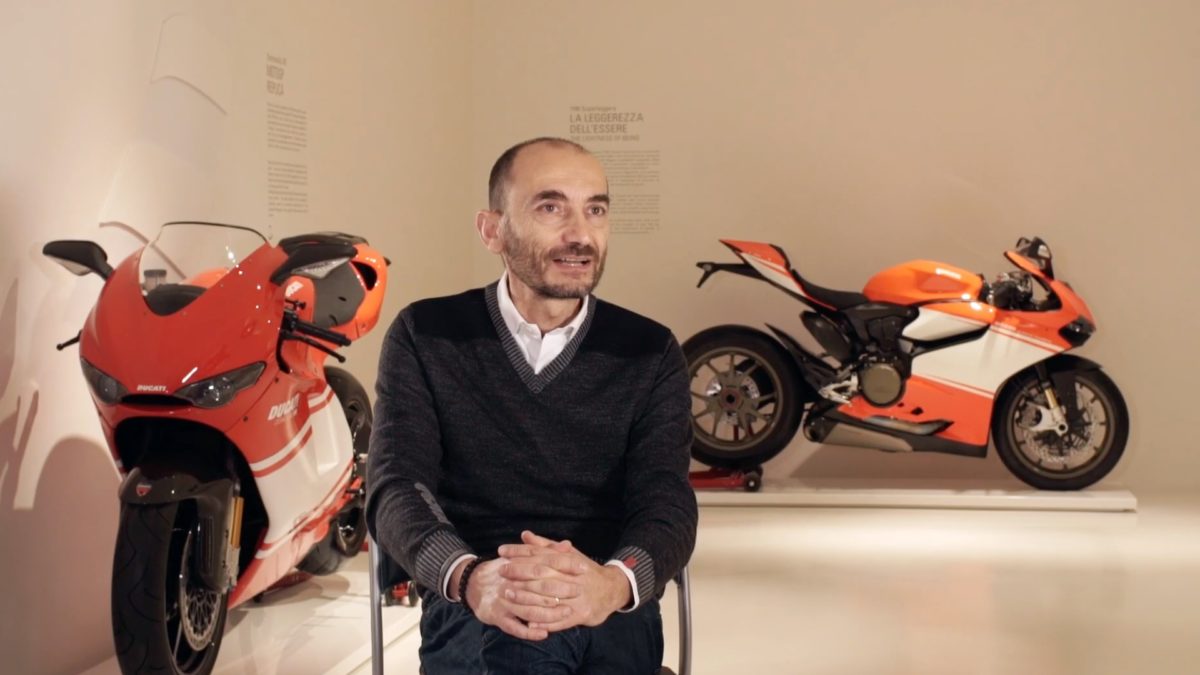 1926, Borgo Panigale, Bologna.
The three Cavalieri Ducati brothers (Adriano, Bruno and Marcello) founded the Ducati Radio Brevetti Scientific Society. Driven by the enthusiasm generated by the technological discoveries of Guglielmo Marconi, Nobel Prize winner and father of the radio transmission, they began producing a small condenser called “Manens” in a laboratory located in the center of Bologna, where they worked together with two employees and one secretary.

During the Second World War the factory was destroyed. The Ducati brothers then decided to introduce, in 1946, the production of the first motorcycle, the “Cucciolo” auxiliary micromotor, designed to meet the needs for an economical, easy-to-use mode of transport.

The Ducati story has lasted over 90 years, and recounts the passion for speed through its origins, the beauty of its motorcycles and the charm of a company that was born in Bologna and took Emilian spirit to the rest of the world. A spirit embodied by many characters who from 1926 to today have contributed to building the Ducati legend. One of these people is Claudio Domenicali, current CEO of Ducati Motor Holding, who in the new millennium played an important role in the history of the “reds” from Borgo Panigale.

We interviewed him, and together we retraced his first years at Ducati, the debut in MotoGP and his vision of the Motor Valley.

Claudio Domenicali was born on 3 November 1965 in Bentivoglio, in the province of Bologna. After graduating in mechanical engineering from the University of Bologna, he joined Ducati in 1991.

The debut of Ducati Corse in MotoGP.

After a professional path of growth within the company, he was appointed Chief Executive Officer of Ducati Corse in 1999. In 2001 Ducati decided to entrust its own department dedicated to competitions with the study for the potential construction of a 4-cylinder V engine, in order to participate in the World Championship. A year later, the engine project called Desmosedici was ready, and in August of the same year the first tests of the Ducati Desmosedici were held, in preparation for the MotoGP championship in the 2003 season.

Loris Capirossi and Troy Bayliss led the two Ducatis to their debut. During the first season the Italian bike amazed the world for their competitiveness despite being only in their first competitive season. Domenicali took the position of Product R&D Director of Ducati Motor Holding in 2005, to take charge of the technical management of production bikes, as well as product marketing. While still being Managing Director of Ducati Corse, he left everyday management to the technical director Filippo Preziosi.

By 2007, the MotoGP era closed with the 990 cm³ MotoGP. The displacement dropped to 800 and the new Desmosedici GP7 was driven by veteran Loris Capirossi and young Australian Casey Stoner. The latter, on September 23, 2007, led Ducati to win its first MotoGP world title, interrupting the domination of Japanese companies.

The Motor Valley for Claudio Domenicali.

History and future, challenge and success: the Ducati Museum is the place to take in the legend of the “Reds from Borgo Panigale”. The temple that traces the history of Ducati, which celebrates style, performance research and a passion for racing. It is also one of the most prestigious locations of the Motor Valley, which was where our interview took place.

“The work that many companies are doing, together with the territory, the Region, in promoting this concept, this idea of the Motor Valley is extraordinarily important”. For Domenicali, the central theme is to “create new generations” that are able to ride the technological change that the manufacturing sector is facing.