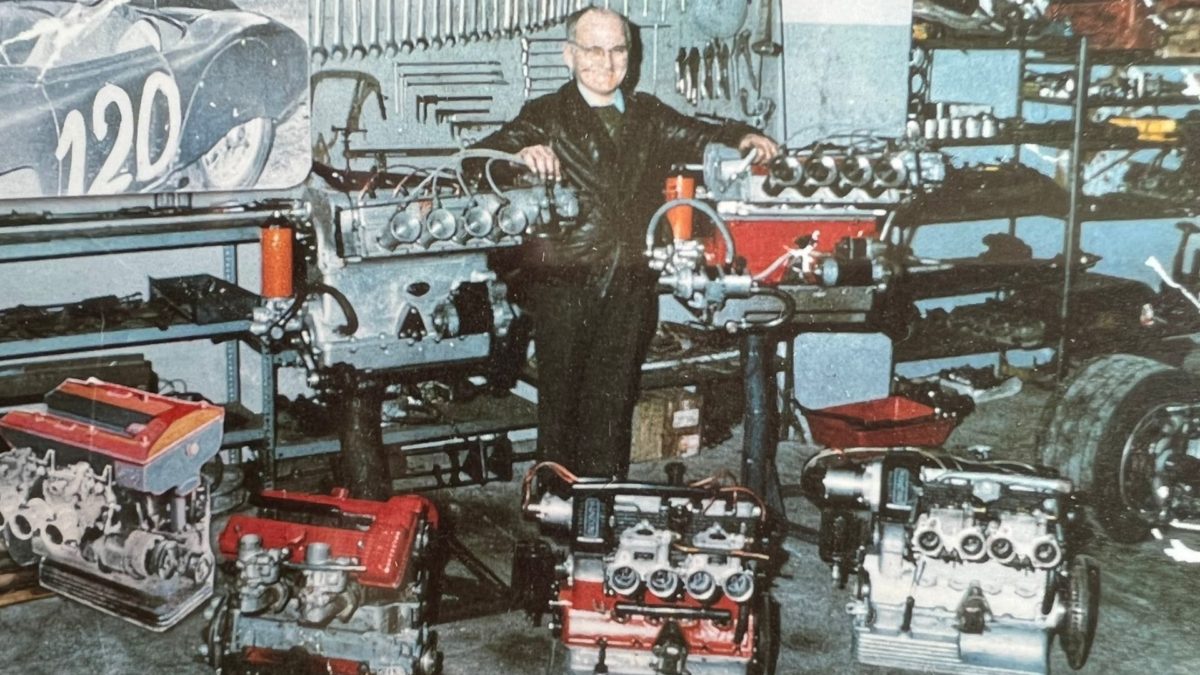 If there was a Motor Valley pantheon, there’s no doubt that Ilario Bandini would be part of it. And if we retraced its history, he would be right up there as one of its Founding Fathers.

Driver, manufacturer, entrepreneur: Ilario Bandini did it all. He built the cars, modified them, raced them, and exported them across the world. Gentle-natured but with a fierce mind and spirit, Romagna-born Ilario Bandini was amongst the main protagonists of the Motor Valley when it was still in its infancy—more artisanal than industrial—made up of legendary companies born in people’s garages.

Although closely tied to his homeland, he found much more fame abroad than in Italy: Bandini’s intense passion saw him take on names far bigger than him, however with talent and imagination, he succeeded in establishing himself on the international scene and earning himself an indelible position in the history of sports cars, particularly amongst racing fans overseas.

Training and experience in Africa.

Ilario Bandini was born in Rovere, a suburb in Forlì, on 18 April 1911. His parents sold horses, but it was clear from the get go that Ilario was attracted to a new generation of transport. His adventure in the world of engines and cars began at the young age of thirteen, when he started working at a mechanics workshop in Forlì.

In 1936, he left for Eritrea, then an Italian colony, where he managed to put away a tidy sum repairing lorries and operating a transport business between Dekemhare and Asmara. He used this money when he returned to Italy in 1939 to start up his own company—a garage with car rental service—and to enter the world of racing… however, not on four but on two wheels, on-board a Gilera he purchased from a dealer in Forlì. However, following an accident in Imola, he fractured his good leg (the one that had survived other previous mishaps), prompting him make the decision to abandon motorbikes and dedicate himself exclusively to cars.

In April 1940, he took part in the Mille Miglia with a Fiat Balilla Coppa d’Oro, however Italy’s involvement in the war soon suspended all sports. One of the consequences of the conflict was also a lack of fuel, which Bandini managed to overcome by adapting his cars to run on wood gas.

This was just the first of a long series of extraordinary feats, demonstrating Bandini’s exceptional creativity and skill. The second was when he decided to take his Fiat 1100 apart into pieces so that he could hide it and avoid its requisition by the German army. In 1946, once the war was over, he put it back together again from scratch and took advantage of the opportunity to test out some of his ideas. As well as modifying the chassis and suspension system using parts from a Gilera motorbike, he added his own touch to the original 1100 engine to boost its performance. For the body—a one-piece two-seater design (barchetta) with elegant yet sporty lines —he drew on the support of Rocco Motto, a coachbuilding company in Turin specialised in aluminium. Once the work was complete, Bandini designed a stylised image of a prancing cockerel and a Romagnola caveja, in black against a yellow background with an Italian flag and “Bandini” lettering along the bottom: the famous Automobili Bandini crest, making its debut appearance on the 1100, the very first vehicle ever to be produced by Ilario Bandini. 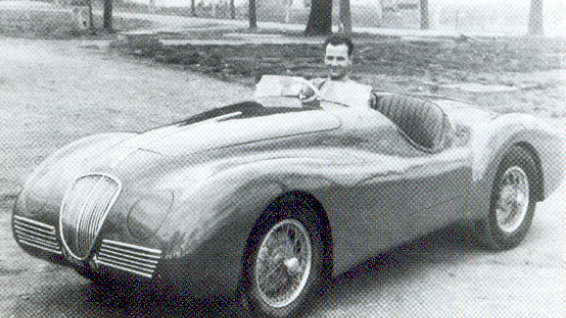 Bandini’s first victories in the US.

From then on, Bandini put his heart and soul into the production of racing cars, which he would often drive himself in major competitions.

In 1949, he took part in the Mille Miglia with the new Bandini 1100 with torpedo body, featuring motorcycle mudguards and twin-cam engine adapted from an Alfa Romeo, and shortly after had his first class victory at the Giro dell’Umbria.

Bandini cars were clearly competitive, and it wasn’t long before Tony Pompeo, king of the sports car import scene on the East Coast of the United States, realised that these chassis, so light yet so stable, paired with a Crosley engine, could wreak havoc in the 750 category.

Bandini didn’t waste any time and immediately began modifying the lubrication, displacement and distribution of the Crosley engine, assembling it all into a chassis weighing just 18kg, encased within Motto’s slender body. And voilà, that’s how the Bandini 750 sport siluro was born: the car that saw Bandini shoot to stardom. Equipped with a precise and stable front end, a low centre of gravity and exceptional aerodynamic efficiency, the 750 sport siluro was designed to enhance the driver’s performance, and saw Dolph Vilardi and Melvin Sachs win the SCCA national championship in 1955 and 1957. Bandini cars acquired celebrity status, ending up on the front cover of major magazines and exhibited in Chicago and Madison Square Garden in New York. William F. Nolan, multi-award-winning American author and screenwriter, even used them in one of his stories.

Thanks to its continued success, the 750 sport siluro became the most long-lived model of all Automobili Bandini cars. Produced between 1950 and 1956, updated with the mastery of Bandini himself to conform with regulatory changes (for example, removing the car’s distinctive motorcycle mudguards made it suitable for the “750 racing” class), it remained competitive for a very long time, winning its final victory in 1963, thirteen years after its first appearance.

Automobili Bandini takes its growth to the next level.

Whilst his homonymous cars accrued triumph after triumph overseas, within national borders, it was Bandini himself who brought even more prestige to their name. With his 750 sport siluro and the new Bandini formula 3, the Forlì-born manufacturer and driver took part in various races where he continued to take home major victories, such as the Bologna-Raticosa Hill Climb in 1952.

In a bid to step up his efforts in the world of racing, he founded the Gruppo Sportivo Bandini, which he ran alongside his work at the garage, all the while continuing to develop and produce his own cars, meticulously pining over every detail, from design to on-road testing.

Two models stood out from the rest: the Bandini GT 750 Zagato, a two-seater berlinetta that won the “Concorso d’eleganza città di Rimini” in 1957, and inspired the iconic double bubble or “doppia gobba” roof design that is now symbolic of Milanese styling, and the Bandini 750 international sport, descendent of the 750 sport, otherwise known as the “Saponetta” and currently displayed at the Marconi Museum in Los Angeles.

In 1960, Bandini’s popularity was at its peak. Ilario visited the Corsley factory at Cincinnati and was invited to relocate his operations there, however he couldn’t bring himself to leave his Romagnolo roots and turned down the offer. In the meantime, he created the Bandini 1000 P, uniting the technological revolution that the engine had since undergone with a rear-mounted design.

However, by himself, Bandini struggled to keep up with the constantly changing regulations and the increasingly fierce competition of major manufacturers. In the mid 1970s, he decided to halt production for the US, and instead chose to dedicate himself to the construction of prototypes as privateers for Italian “gentleman drivers”.

Bandini’s production levels gradually tapered off, but his desire to craft, innovate and experiment never waned. In 1972, he presented the Bandini 1000 sports prototype: the first to be equipped with a rear wing. In 1975, together with the Gruppo Piloti Bandini, he set up an exhibition dedicated to motor racing, which saw tens of thousands of visitors flock to Forlì until 1979, as well as Formula 1 drivers James Hunt (McLaren) and Niki Lauda (Ferrari). In 1980, Bandini created the 1300 cc with 16 valves, featuring mechanical fuel injection and electronic ignition, behind the wheel of which he participated in 1985 in what would be his last race, the Predappio Rocca delle Caminate hillclimb, brought back into the limelight by Bandini himself after several years of not running. His last creation was the Bandini Berlinetta 1000 turbo 16V, which he completed at the age of 80, just a few weeks before he passed away in Forlì on 12 April 1992.

The legacy of a normal yet extraordinary man.

In almost fifty years, Automobili  Bandini produced a total of 75 one-off cars. Gradually becoming true cult objects over time, 47 of them still exist and are registered on the Registro Storico Bandini, managed by Dino Bandini, nephew of Ilario, guarantor of his uncle’s masterpieces and custodian of the Collezione Automobili Bandini, where some of the world’s most iconic cars can still be admired.

However, these numbers only tell part of the story of a man whose creativity and ingenuity came second only to his modesty. Ilario Bandini’s greatness is reflected in the Keys of the City, presented to him by the Mayor of Daytona in 1960 at the end of an overseas tournament in some of the most famous places in the world of American motor racing. It is reflected in the mutual respect that tied Bandini to Enzo Ferrari, famously reserved and selective in his affection, who in 1964 personally attended the team’s awards ceremony to show his support for his friend “Bandén”. And, finally, it is reflected in his own personal victory, in which he took great pride: an honorary doctorate in engineering. Awarded to him in 1981 by the Pro Deo University in New York, he shares this qualification with the Drake and Ferruccio Lamborghini: an attestation of greatness reserved only for the distinguished figures who shaped the history of the Motor Valley. 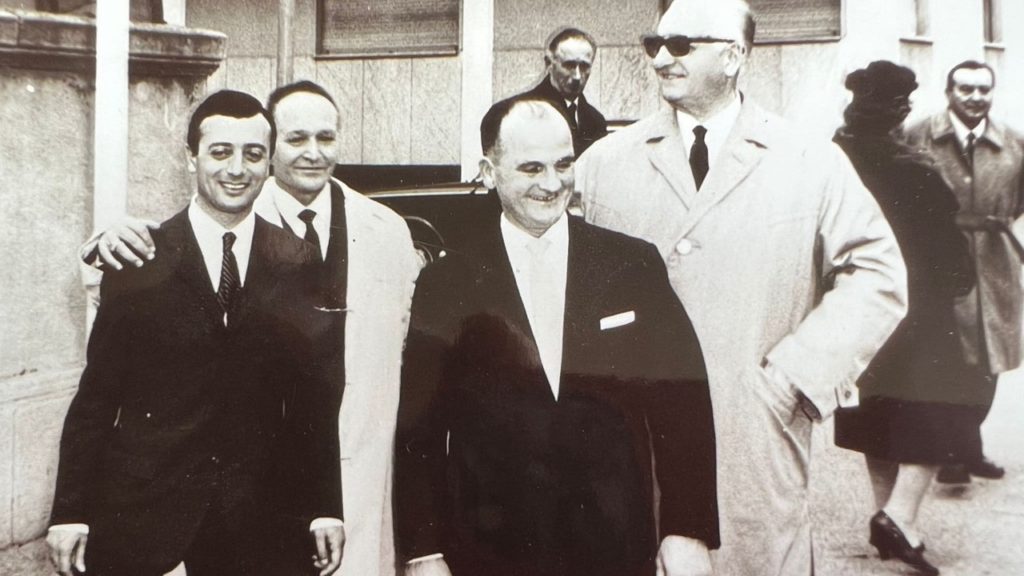