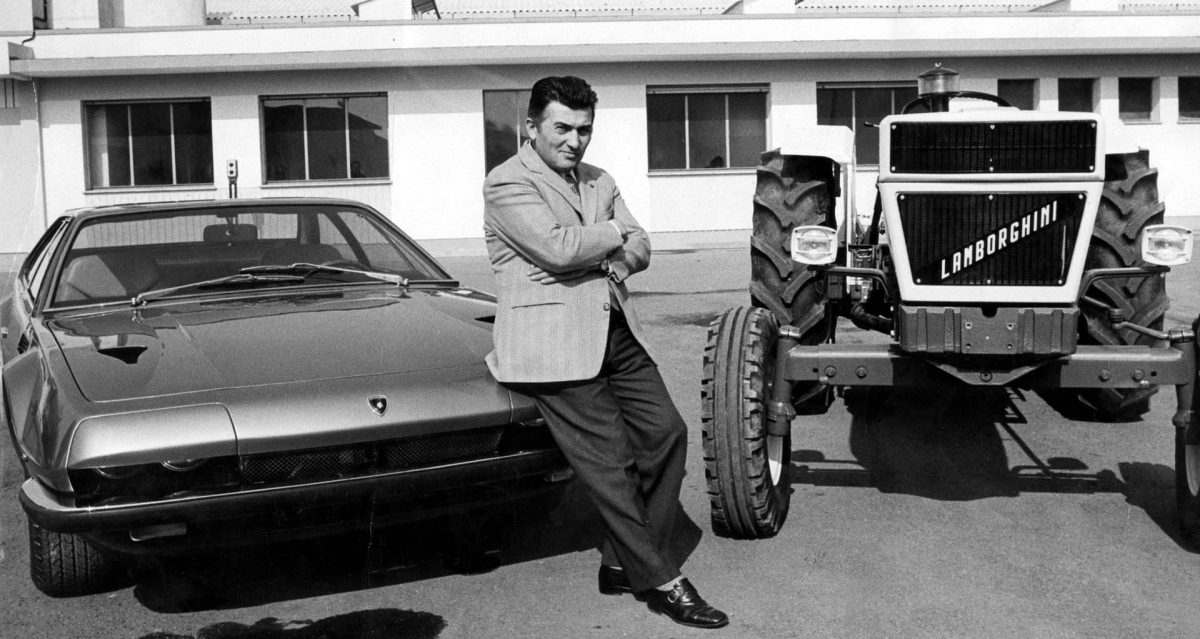 On April 28th 1916, in Renazzo in the province of Ferrara, Ferruccio Elio Arturo Lamborghini was born under the zodiac sign Taurus. “A dream challenge” began that day in a small village in the Municipality of Cento.

Born into a family of smalltime farmers, Ferruccio preferred mechanics than working in the fields. His passion found an outlet in one of his father’s stables, which he transformed into a sort of workshop. The young Ferruccio spent whole days creating and repairing objects for domestic and agricultural use. His father, albeit reluctantly, accepted his son’s passion and allowed him to attend the Institute of professional training “Fratelli Taddia” in Cento. Ferruccio graduated with good grades, and after briefly becoming an apprentice at a local blacksmith, he managed to get hired by the Righi workshop in Bologna, the most important in the city, which at the time had obtained a contract to work on means of transport for the Army.

Ferruccio Lamborghini: The origins of the legend

At the age of 18, after his Bolognese adventure had ended, Ferruccio opened a shop in Renazzo with his friend Marino Filippini, marking the beginning of a carefree period dedicated to experimentation. However, the Second World War burst onto the scene abruptly, and Ferruccio was sent to Rhodes, Greece, under the Autoreparto Misto di Manovra (the Autocentro). During the war he had the opportunity to put his mechanical skills to the test as a repair technician, having total responsibility over the vehicle section. Thanks to his tenacity and his extraordinary intuition he was named head of the Workshop Department, and in a short time he became one of the most popular characters in the field. In September 1943, during the war, the Autocentro staff was forced to flee, but Ferruccio soon heard the call of the engines and returned immediately to the city. With the permission of the Germans, who grasped Ferruccio’s skill and the possibility of exploiting their abilities themselves, he opened a small workshop.

In Rhodes he also found love. Her name was Clelia Monti and she was originally from Ferrara. In 1946 the two returned to Italy, and were married in the Santa Maria church in Vado in the Ferrara area. In October 1947, Tonino was born, the only son of Ferruccio Lamborghini. A happy moment, followed unfortunately by the tragic death of Clelia, who died during childbirth due to postpartum complications. The entrepreneurial spirit of Ferruccio Lamborghini: the Lamborghini Tractor is born

After the war, a new air of freedom and initiative was rife in Italy. Agriculture – for centuries the greatest source of income in the Bel Paese – was in strong crisis, but these difficulties allowed Ferruccio to come up with a great idea, glimpsing a new market for the mechanization of large-scale agriculture. The demands from the agricultural sector, combined with the experience acquired by Ferruccio in repairs, led him to pursue a career as an entrepreneur in the production of tractors. He bought pieces of old tanks left in Italy by the Allies, and turned them into agricultural machines. Success was immediate. Lamborghini tractors were cheap but durable, so in 1948 in Cento Ferruccio founded the Lamborghini Tractor. The management of the company was followed closely by Annita Borgatti, whom Ferruccio married a few months earlier and with whom he would share the management of his companies for over thirty years

During the fifties, Lamborghini Tractors became one of the most important agricultural machinery manufacturing companies in Italy, and in the early sixties it had nearly 400 employees and a production of about 30 units a day. Italy was experiencing its economic boom and the home was increasingly playing a central role in the everyday life of Italians. During a trip to the United States where he visited factories that produced burners, Ferruccio sensed that the same burners could be the object of the future, capable of supplanting coal-fired boilers for heating. He employed the best technicians and established Lamborghini Bruciatori Condizionatori in Pieve di Cento (BO), succeeding in establishing it on the market thanks to high technical qualities and at a very competitive price. Ferruccio always looked forward, never backwards, working tirelessly to find new inspiration on which to focus his efforts. It is this entrepreneurial spirit that lead him to even conceive a helicopter, an ambitious project for which a yellow Lamborghini prototype would be made, which is on show in the Ferruccio Lamborghini Museum in Funo di Argelato in the province of Bologna.

His name began to be known all over the world. He became wealthy and succeeded in crowning one of his greatest dreams: buying a Ferrari, a 250 GT. His expectations, however, were not exceeded. Ferruccio was not satisfied with the performance of his new car. The clutch did not seem solid enough and able to withstand the stress of the car, so he decided to talk about it directly with Enzo Ferrari. Ferrari, with his ferocious character, responded with irony:

“Ferruccio, my cars work perfectly. You are the problem. You are not able to drive super-sports cars correctly because you are used to driving your tractors. You’d better keep dealing with tractors and let me take care of sports cars. “

For Ferruccio it was a real challenge that he felt ready to pick up: at the end of 1962 he summoned his collaborators and announced his intention to start building cars.

“When I was young I was a decent driver and I also had a Ferrari, a Maserati, etc. But one day I had a discussion with my friend Enzo Ferrari who told me that I didn’t know how to drive a Ferrari and I only knew how to drive a tractor. From then on I stuck to it and I said to myself: “now I can do cars”

Several people close to Ferruccio were convinced that this extravagant enterprise could not bring any profit, in a world as complex and ruthless as that of the car business. Annita herself, who ran the Lamborghini Tractor plant, asked him to reconsider. Ferruccio, for his part, strongly believed he could succeed, and relied on Cavalier Corrado Carpeggiani to recruit the best technicians in the field. A few weeks later he met with engineers Gian Paolo Dallara and Paolo Stanzani, to whom he entrusted the Granturismo project, as well as Giotto Bizzarrini, who started working on the engine design. Once the men to start the project were identified, Ferruccio began to start to think about a symbol to put on his cars. The obvious choice was his zodiac sign taurus, a bull that perfectly embodied strength, power, a valiant and fearsome bull.

In May 1963 he founded the Automobili Ferruccio Lamborghini company, setting the goal of presenting his first creation at the Turin Auto Show, the most important event of the era. He bought a plot of land in Sant’Agata Bolognese allowing technicians to work in a building next door, while at the same time he started the construction of a very modern factory. The inauguration took place in the autumn of 1963 together with the production of the 350 GTV chassis and engine. In a climate of general skepticism came the moment of public release. The car was presented first in Turin and then at the Geneva Motor Show. I was a complete success, and soon everyone recognized the 350 GTV as a 12-cylinder masterpiece. The car that marked an era: the Lamborghini Miura

The enthralling enthusiasm of Lamborghini brought its mechanics and engineers to design ever more amazing and cutting-edge cars, transforming the company into one of the first Italian manufacturers of Granturismo. While the quality of cars is unanimously recognized, even the “character” Ferruccio Lamborghini was increasingly becoming an emblem of the world motorsport scene.

At the 1965 Turin Motor Show, Lamborghini presented a unique chassis designed by the two young Bolognese engineers Dallara and Stanzani. The peculiarity of the 400 GT was its 12-cylinder 4-liter engine, placed centrally behind the passenger compartment in a transverse position. The project was also appreciated by the famous Turin coachbuilder Nuccio Bertone, who, as soon as he saw the chassis, proposed to “dress it”.

“I am the person that can make the shoe for your foot.”

Marcello Gandini was entrusted with the task of interpreting Bertone’s ideas, to conceive a unique and sensational body. A few months after the presentation of the chassis, at the Geneva Motor Show in 1966, Lamborghini presented a machine destined to make history: the P400 Miura. Incredible design, the lowest Granturismo in the world with its meter and a half of height and the first in the world to break down the 300 km / h wall. La Miura achieved success that exceeded even its creator’s expectations. A new direction for the Lamborghini brand

At the end of the 1960s, the Lamborghini Tractor was also hit by the crisis involving the Italian economy. The episode that put the company in great difficulty involved the Bolivian Government, who after having requested a supply of 5,000 tractors canceled the order due to a coup d’état. The unsold tractors, added to the overproduction that characterized the early seventies, leading to the sale of the buildings to FIAT in 1971. With the relief of the high management costs of the Tractors and the regained liquidity coming from the growth of sales of boilers, air conditioners and burners, Ferruccio seemed reborn.

Despite his renewed optimism, the years of crisis and an industrial world with which Ferruccio no longer feels in tune with marked him deeply, forcing him to make two strong decisions. In 1972 he sold 51% of the shares of Lamborghini, and the following year he sold the Tractors to Same, to which he had already entrusted the company a year earlier.

Ferruccio retired on the Trasimeno Lake to the Fiorita, away from the turmoil of the industrial world, to devote himself entirely to his estate, which his entrepreneurial spirit pushed to transform into a farm. He died in 1993, surrounded by friends who visited him every day, reliving the past and planning for the future. From the first tractor to the prestigious cars: The memory of Ferruccio Lamborghini

The Ferruccio Lamborghini Museum, inaugurated in 2014 in Funo di Argelato (BO) by Tonino Lamborghini, is dedicated to Ferruccio’s industrial genius. In the Museum, Ferruccio’s life is told through his period of industrial production, from the first Carioca tractor, to all the most important models of the 50s, 60s and 70s.

A new Lamborghini Museum was founded on 9th June 2016, just a few kilometers away. Located in Sant’Agata Bolognese, home of the Casa del Toro, the museum retraces all the stages that have shaped the history of the Lamborghini brand.

After changing ownership 4 times since 1972, Lamborghini was purchased in 1998 by Audi, a company belonging to the Volkswagen Group. Today Lamborghini cars are among the most famous, exclusive and desired in the world. Sales for 2018 were up 51% compared to 2017 with 5,750 cars delivered, testifying their enormous success. The legend of Lamborghini lives on, as well as the legend of its founder. 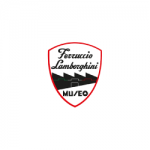 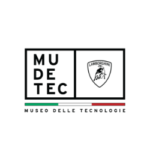