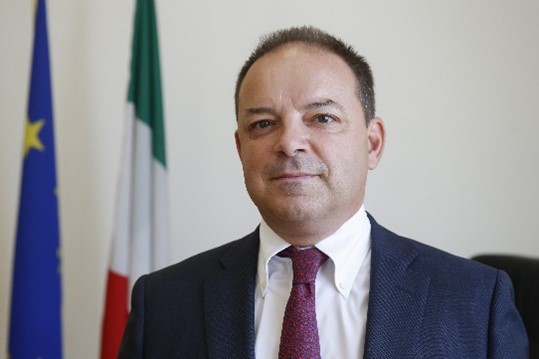 Lawyer, freelance journalist, adjunct professor of new technology law. Formerly responsible for regulatory affairs of the digital transformation team of the Presidency of the Council of Ministers and, later, Legal Advisor to the Minister for Innovation. He teaches new technology law at the European University, IT contract law at the Master in legal informatics and IT law at the University of Bologna and privacy in electronic communications at the Master in protection of personal data of the Roma Tre University. He founded the ELex firm of which he was a partner until he took up the position of member of the Board and the Institute for innovation policies from whose Presidency he also resigned following his hiring as a member of the Board of the Guarantor for the protection of personal data. He is the vicar representative of the Italian Government at the ICANN Government Advisory Board.

MASA on the road
Institutional Greetings:

Speakers for a brief report on the progress of the project:

Round Table: Smart road and self-driving car: what prospects for privacy?
Self-driving cars and the intelligent infrastructures that communicate with them collect and record an enormous amount of data: some purely technical, but others also personal. What are the guarantees for the privacy of road users and residents in a smart area? The conditions of lawfulness of processing, rights of the data subject, security measures and implementation of privacyfriendly technologies are discussed by the scholars who, within the Legal and Ethics working group of the MASA project, deal with data protection? Event in collaboration with the Interdepartmental Research Center on Discrimination and Vulnerability (CRID) - UNIMORE and Privacy Observatory - “Marco Biagi” Foundation.