The exhibition of the creations of Aldo Drudi, graphic designer and designer who ""colors "" speed arrives at the National Museum of Science and Technology 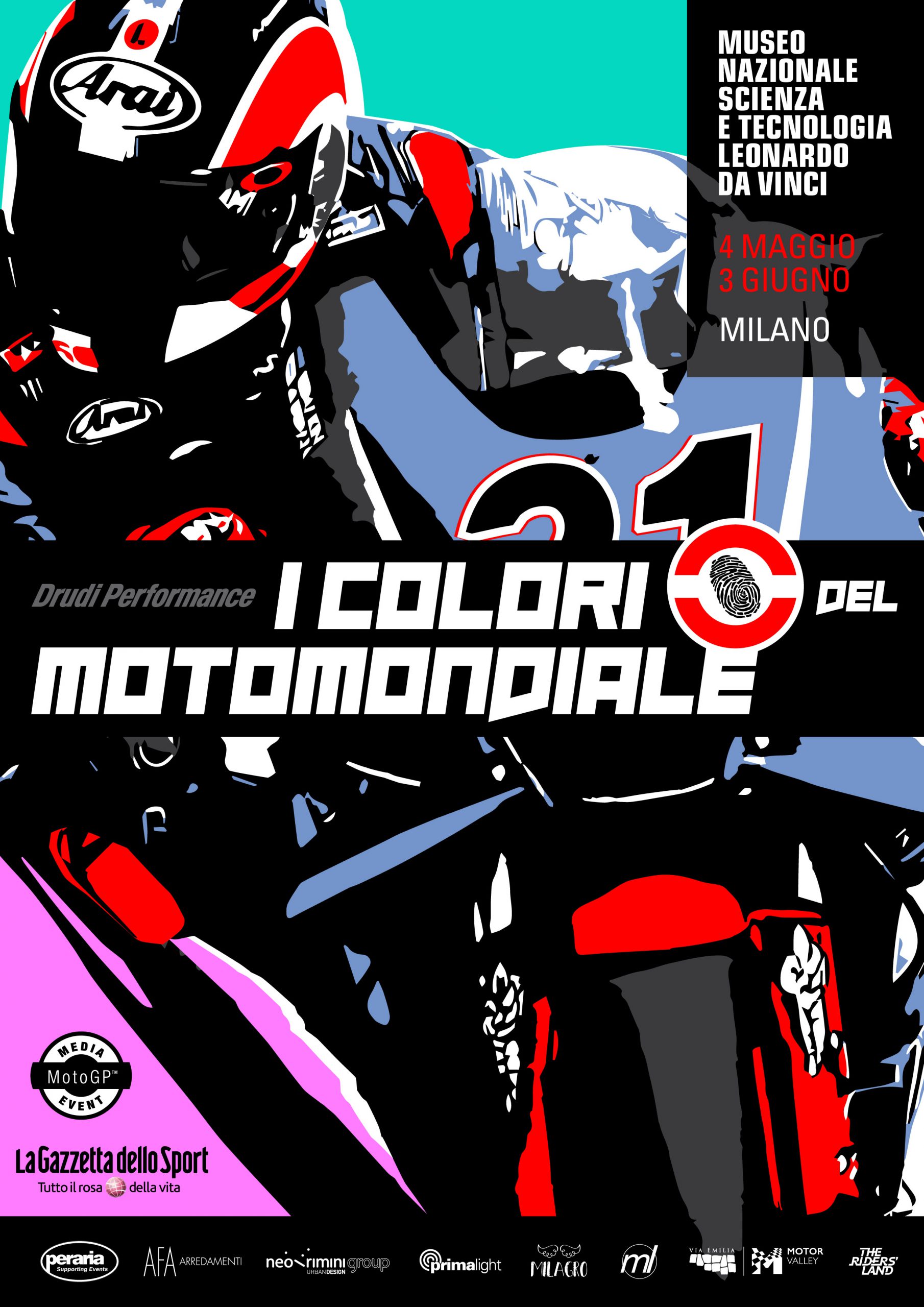 From May 4th to June 3rd, the National Museum of Science and Technology in collaboration with La Gazzetta dello Sport, Motor Valley of Emilia Romagna and the patronage of Dorna, will host the exhibition "The Colors of the World Championship", which presents the creations by Aldo Drudi, designer and graphic designer (Compasso d'Oro ADI) who, with his intuitions, "colors" speed.

The exhibition shows the coordinated images of not only the most famous MotoGP and Superbike teams, but also from the America's Cup (New Zealand team), the colors of the Tornado of the 311rd RSV Group, Honda Burasca 1200, high-tech prototype with an original design and commercialized projects such as the I-Bike Thok and the exclusive Anvera55 crossover boat.

The main theme of the exhibition is a collection of original helmets made by Drudi from the '80s to today. First and foremost comes Graziano Rossi's helmet, the latest made for this season for Valentino Rossi, in addition to the new graphics of many MotoGP riders - Morbidelli, Iannone, Vinales, Crutchlow, just to name a few - as well as Moto2 and Moto3. There are also the historical helmets of Kevin Schwantz, Mick Doohan, Randy Mamola, Loris Capirossi, Max Biaggi, Manuel Poggiali, Noriyuki Haga, Loris Reggiani and Marco Melandri. On show there will also be the Gilera 250, the helmet and the jumpsuit with which Marco Simoncelli won the 2008 World Championship. The exhibition will then present an exceptional and unique opportunity to admire live all the racing motorcycles registered at the Motogp World Championship, exhibited together with the helmet and the suit of their pilots. From 2017 champion Marc Marquez's Honda to the Ducati, Yamaha, Suzuki, Aprilia and Ktm official to those of the satellite teams LCR, Pramac, MarcVDS and Tech3.

Aldo Drudi explains "I thought of this exhibition as a different way of telling the story of motorcycling, and what we know about it, rather than the one that, to many could seem technical or obsessive, simply riders aiming to be faster and stronger. But it's not like that at all. The passion for speed is, in my opinion, something that comes from afar, something atavistic, that we all have inside. Going further than what we can do with our bodies has always fascinated man, from the discovery of the wheel and beyond. Something ancestral, that we can all perceive: the fascination for speed. When drivers wear suits and helmets, it's like they are stepping back in time. Medieval knights who are preparing for battle. If once the weapons were spears or swords, today they are the bikes with which every Sunday they take to the track to challenge themselves first and then the opponents. It is precisely through the graphics and design of these objects that, with this exhibition, we want to talk about the romantic soul of motorcycling ".

There will also be shots by Gigi Soldano (Milagro) and Mirco Lazzari in the exhibition, the most famous Italian photographers in MotoGP.

There could not have been a better place to hold the exhibition but Milan at the National Museum of Science and Technology, which has always been committed to enhancing an important collection dedicated to transport by sea, land and sky. A journey through past, present and future to tell the evolution of technology and the history of those who have defied every limit pushing themselves to distant and unknown places or reaching new goals in sport. An exhibition for those who love passion, courage and creativity.

During all weekends it will be possible to book a special visit to the stores where the museum's historical bike collection is kept.

La Gazzetta dello Sport, the most widely read Italian newspaper and the most loved sports magazine, has always been close to the world of motors and tells stories with passion and is involved in creating this exhibition.

Aldo Drudi's creative genius is the most immediate expression of that passion, ingenuity and entrepreneurial skills that are the founding elements of the Motor Valley of Emilia Romagna, a unique two- and four-wheel "park". Along the Via Emilia both two and four wheeled companies were born such as Ferrari, Maserati, Lamborghini, Pagani, Ducati, De Tomaso, Dallara, Morini, real entrepreneurial excellences born in a technologically advanced region. In addition to international events (such as the Grand Prix of San Marino and the Riviera of Rimini, test of the Moto GP on the Circuit of Misano Adriatico), the Land of Motors counts 188 sports teams (between clubs and stables), 9 company museums (including the Museo Enzo Ferrari of Modena, the Ferrari Museum of Maranello, the Automobili Lamborghini Museum, the Ferruccio Lamborghini Museum and the Ducati Museum of Bologna), a circuit of 21 private collections, 4 racetracks (the "Riccardo Paletti" in Varano de 'Melegari, the Autodromo di Modena in Marzaglia, the "Enzo e Dino Ferrari" in Imola and the Misano World Circuit Marco Simoncelli in Misano Adriatico), as well as 11 karting tracks. A wide range of museums, collections, circuits and events that is unparalleled in the world and has become a real touristic product, with ad hoc holiday packages created to go to the discovery of Emilia Romagna's "Land of Motors", while tasting at the same time the unique food and wine and the incomparable offer of art, culture and landscapes of this region.